For Twin Town 16 the guys at Rebellion Automotive provided us a free wrap for the car using off cuts of orange and some professionally printed vinyl stickers which they donated. Phil, the owner of Rebellion, and his team had been working flat out that day to make sure it was finished in time.

It was everything we’d hoped for, and more. Phil ushered us around to the car. The Lexus didn’t purr anymore. She ROARED! Phil gave her some revs, bouncing the car right up to the limiter. It was unchained. Deafening volume, but not just drone. The sound had definition. The American firing order of the V8 gave her a real Nascar sound. We couldn’t wait to take her out.

We said our thanks, (many, many of them) and began the journey home. She ran and sounded great, aside from a cheap wiper blade flying off on the motorway! A quick spanner job removing the wiper arm so we still had one at least, and we were on the road again.

We spent the run-up to the event adding the final touches to the car. Nascar-inspired Playground tyre writing, some gunmetal alloy wheel paint, tidying up some vinyl and an essential brake pad and fluid change. After packing in most of the garage, just in case, we were ready to roll. 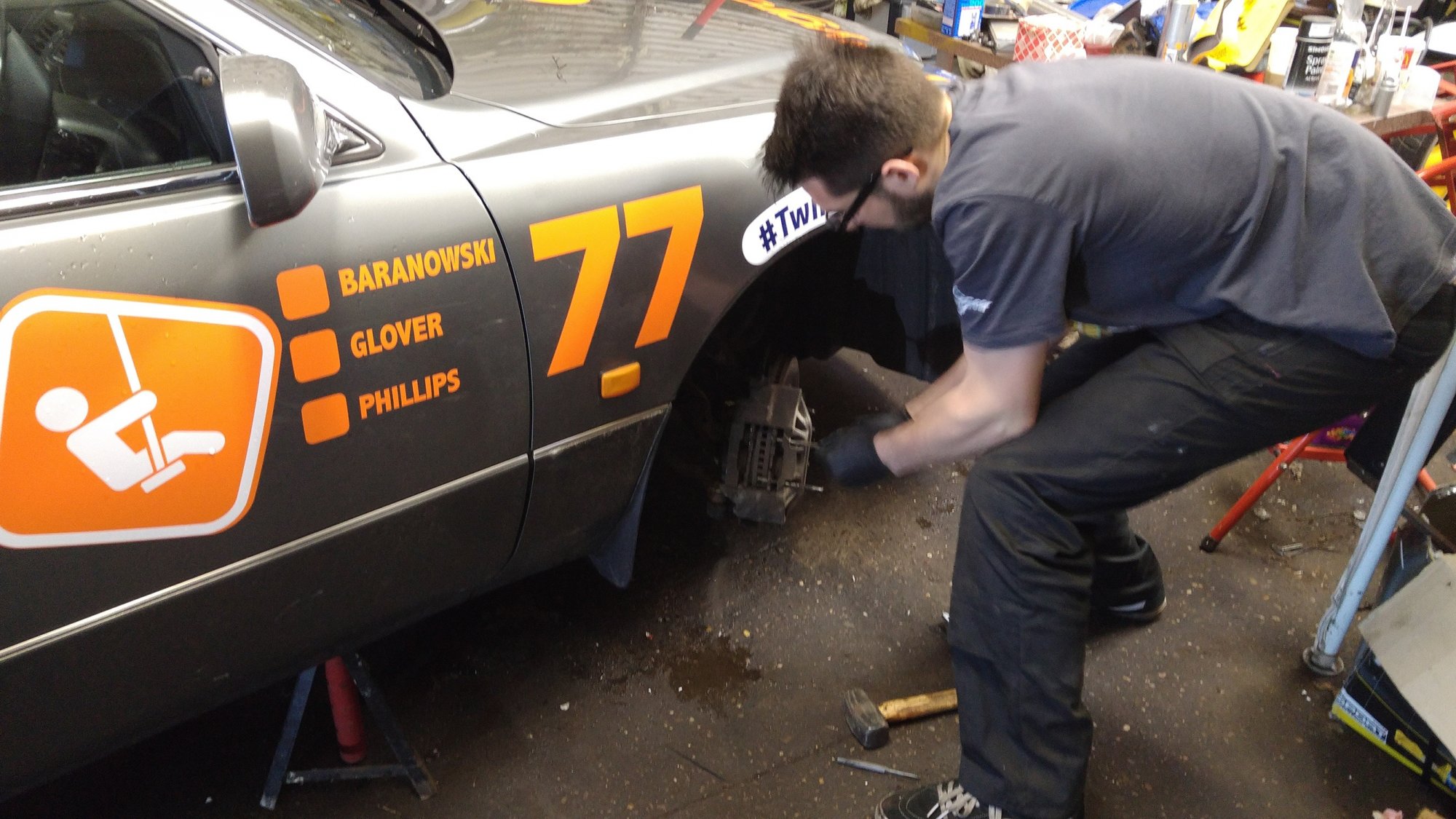 The event began early on Friday morning. Dave, Chris and myself set off at 6.30am for a rendezvous at 7.30 at Blenheim Palace, before the 8.30 official start of the rally.

Blenheim Palace is an enormous, stunning country house with incredibly picturesque grounds. It almost seemed inappropriate that nearly 100 cars costing £500 or less should be allowed into such a grand venue.

As we pulled into the event it dawned on us how big this weekend was going to be. Almost 100 cars with 4 people per car, all in fancy dress, was an incredible sight. The Lexus was parked in formation with the other participant’s cars, and we mingled with the competition, checking out some of their motors. 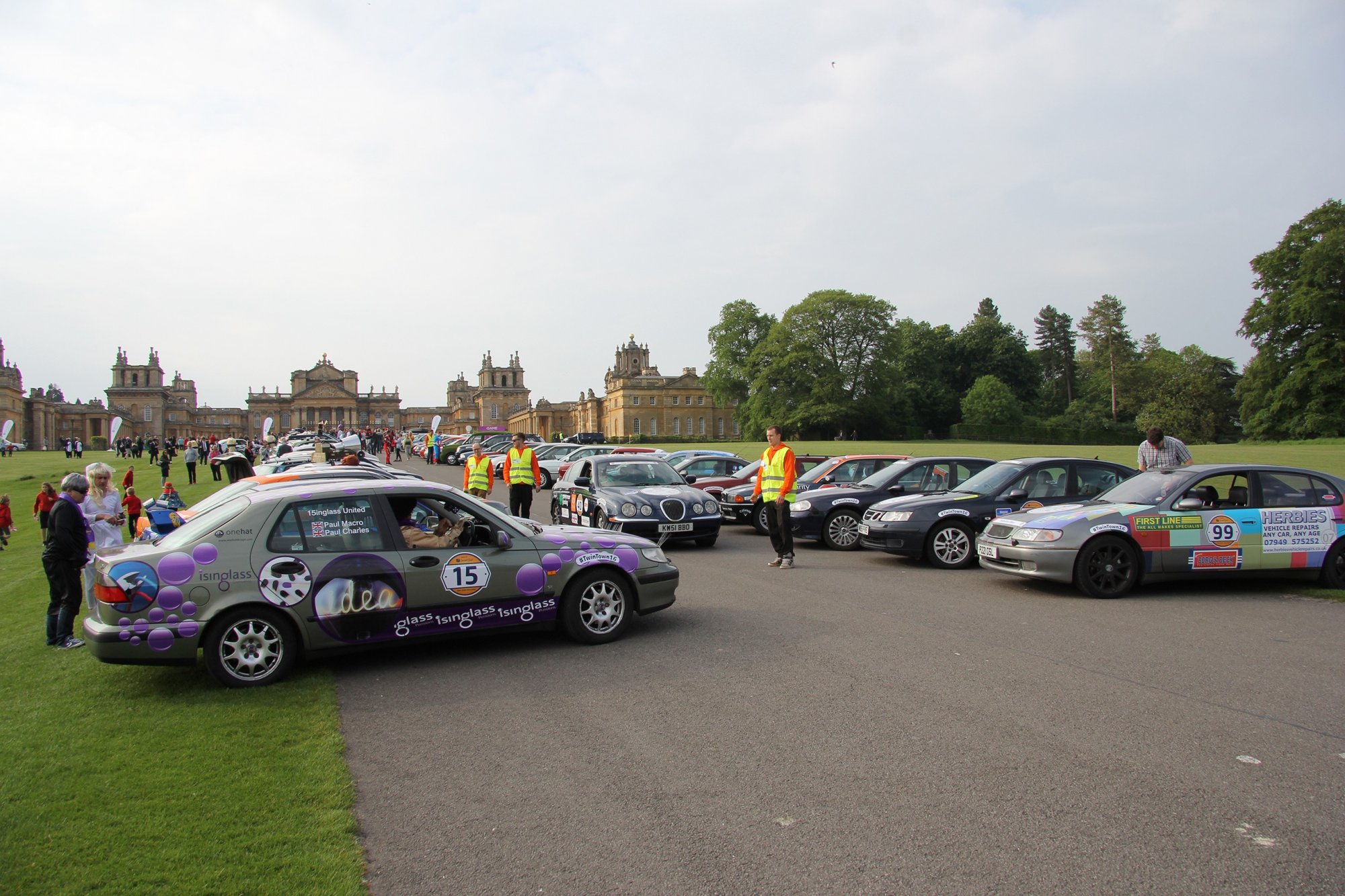 It’s amazing what people decided to spend their £500 maximum budget on. The diversity was great. There were plenty of European midsize saloons of varying brands – Vauxhall Vectras, Ford Mondeos, Jaguar X-Types and Rover 75’s. But there were also some standout cars. These included: 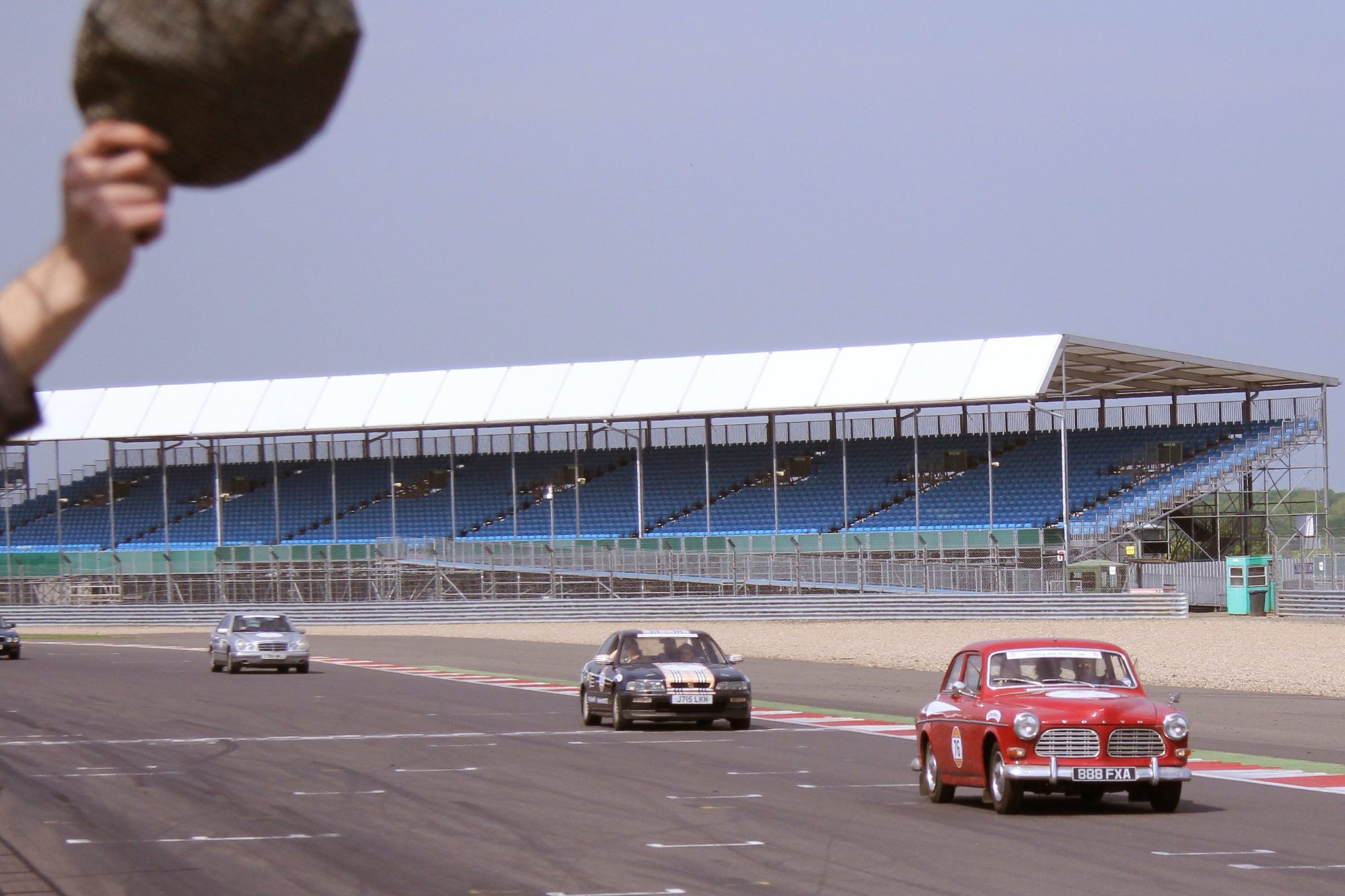 The flag dropped at Blenheim after a Le Mans style running start to the cars, and we paraded to the home of Motorsport, Silverstone. The organisers had planned some parade laps for us to do. Firstly, all the cars piled onto the track for a group photo, before we were split into two groups to do some faster parade laps.

We got to run the National Circuit, using the old pit lane. All three of us got a chance to drive a couple of laps, and it was a phenomenal experience! Every lap we’d blast past the pit lane making a huge amount of noise – both from the engine and us yee-hawing with excitement!

We had a spot of lunch and then it was off to the Channel Tunnel, heading to France. 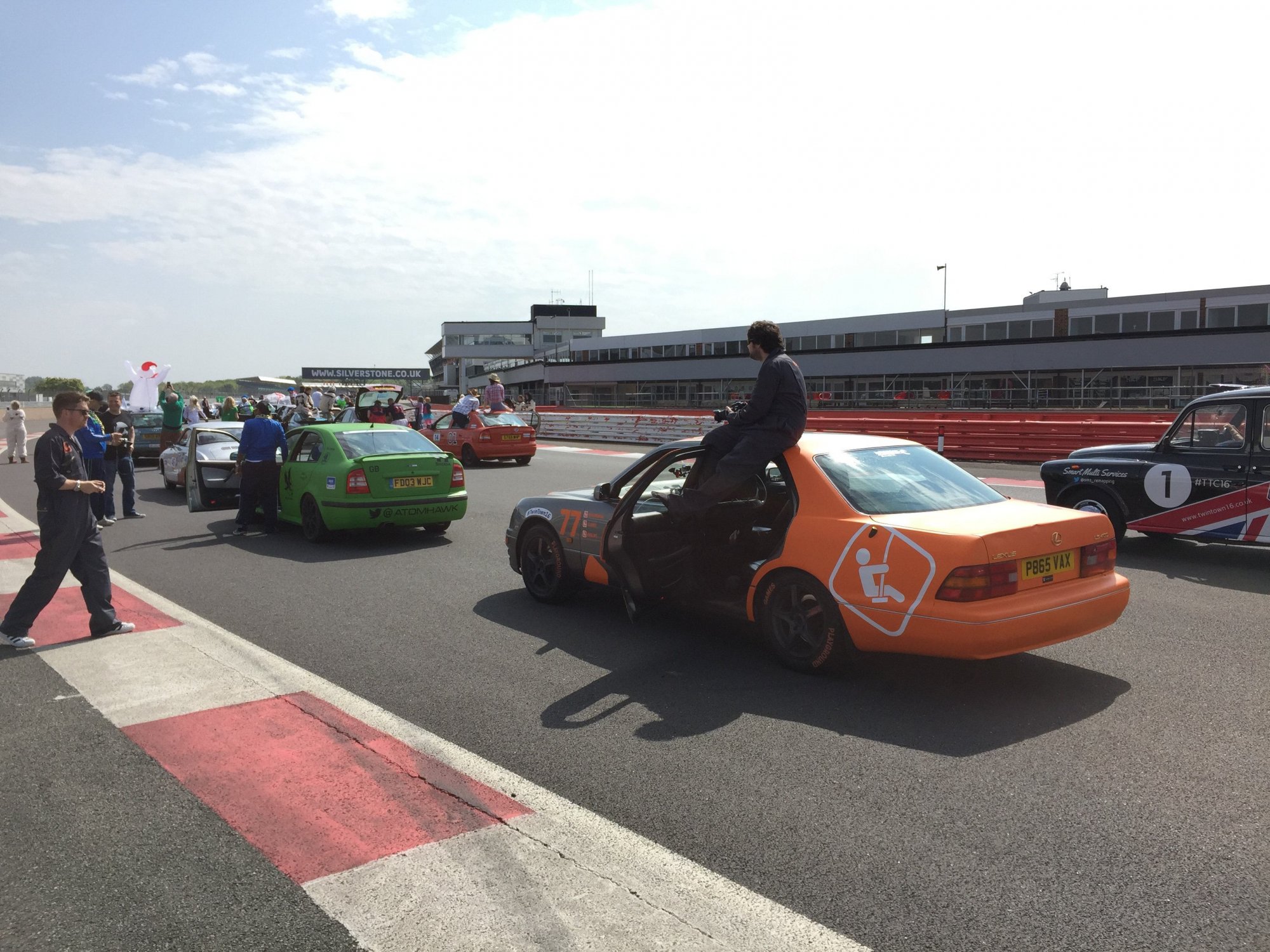 The M25 ring road around London was rammed with traffic. We couldn’t care less though. Spirits were high, and so were the temperatures. This was perfect timing to get everyone else in the traffic jam into the spirit. We wound down the windows and filled the 6 CD changer with some of the best 90’s music we could find. People were waving and smiling, loving the bright orange V8 mobile disco!

We eventually made it to Le Touquet in France, and headed to the welcome reception. We’d already started to make a name for ourselves with the impression our Lexus made, especially the full throttle fly-bys on the French Autoroutes! 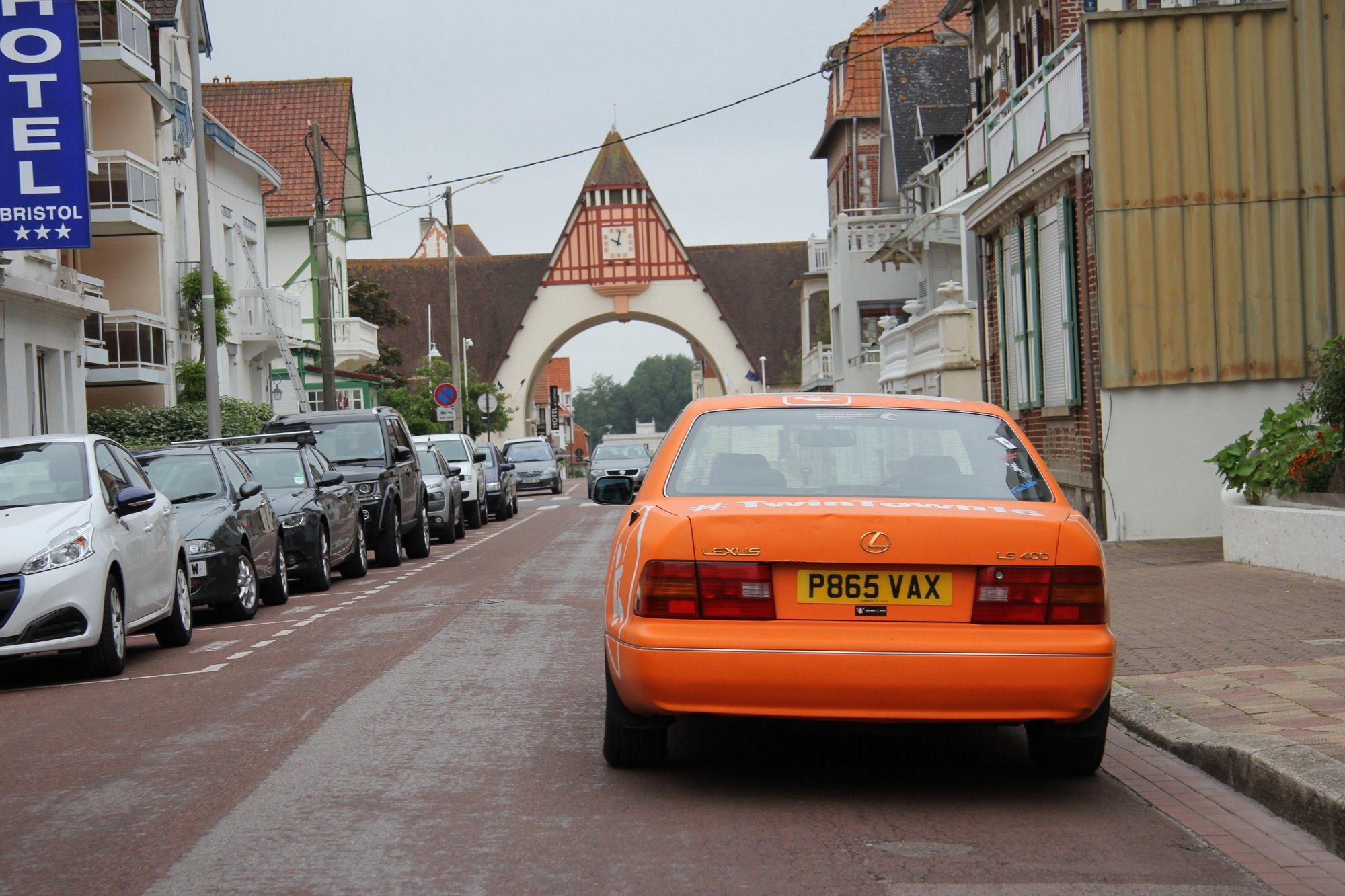 Le Touquet is a coastal town in a beautiful area of northern France. These beautiful surroundings just happen to have some beautiful rural roads too – perfect for a treasure hunt! We employed the help of some friends who joined us on a 3 hour hunt for sights and objects. Strong teamwork and comradery meant we finished well in this event!

The rest of day two was ice cream and miniature golf… It was Saturday after all! 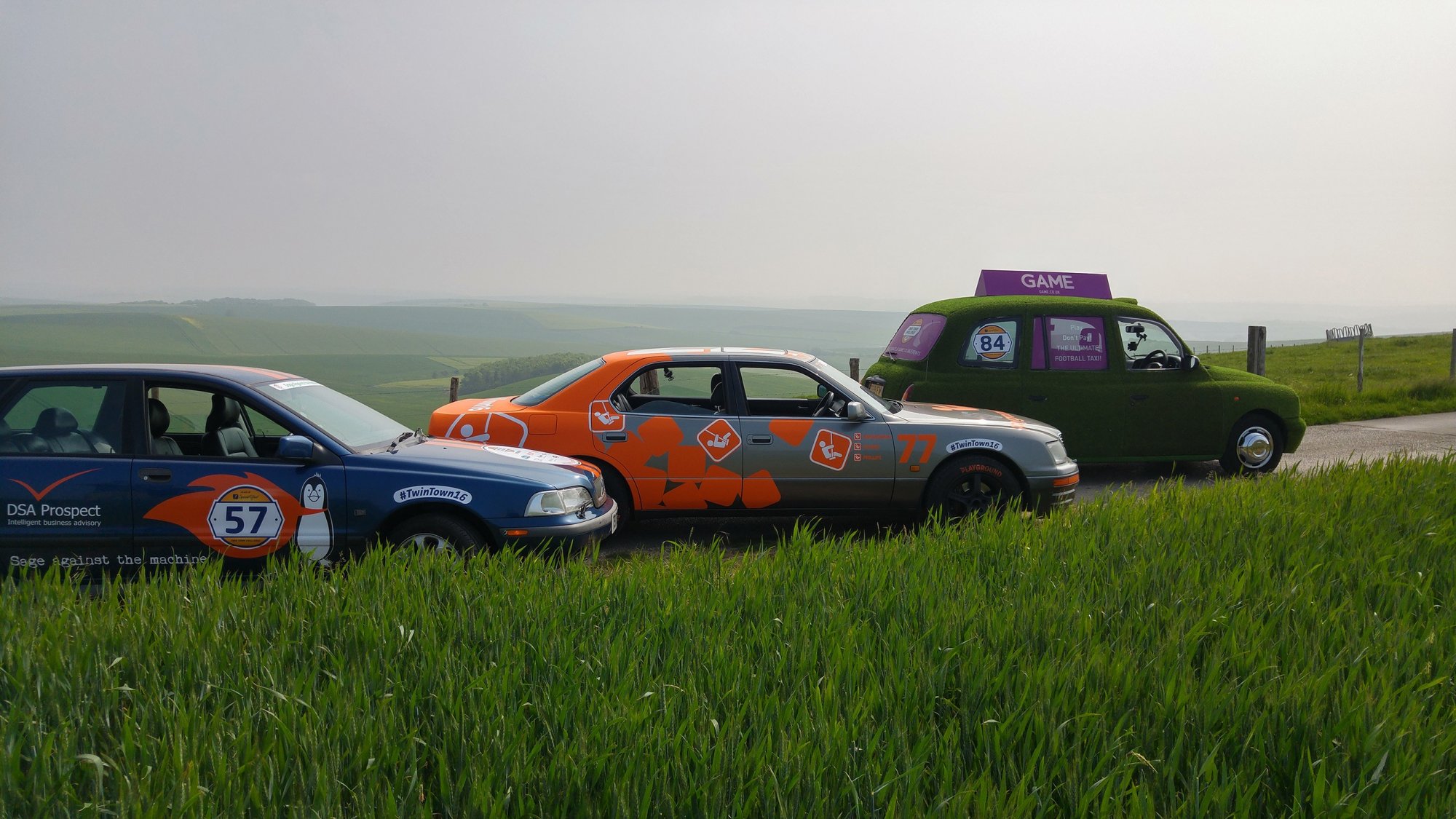 This was the highlight of the trip, a visit to Pilotage Stadium Abbeville. However it almost didn’t happen. We came out to the car and there was no action from the starter motor! After some digging it turned out we’d sheared the battery mount somewhere the previous day and a battery terminal had come loose. Fortunately this was the only fault we suffered on the journey!

There is also an ongoing fuel shortage in France – not ideal when visiting in a 4.0 V8… Fortunately we’d scouted out a fuel station the day before and didn’t have to rely on the jerry cans we’d stowed in the boot! 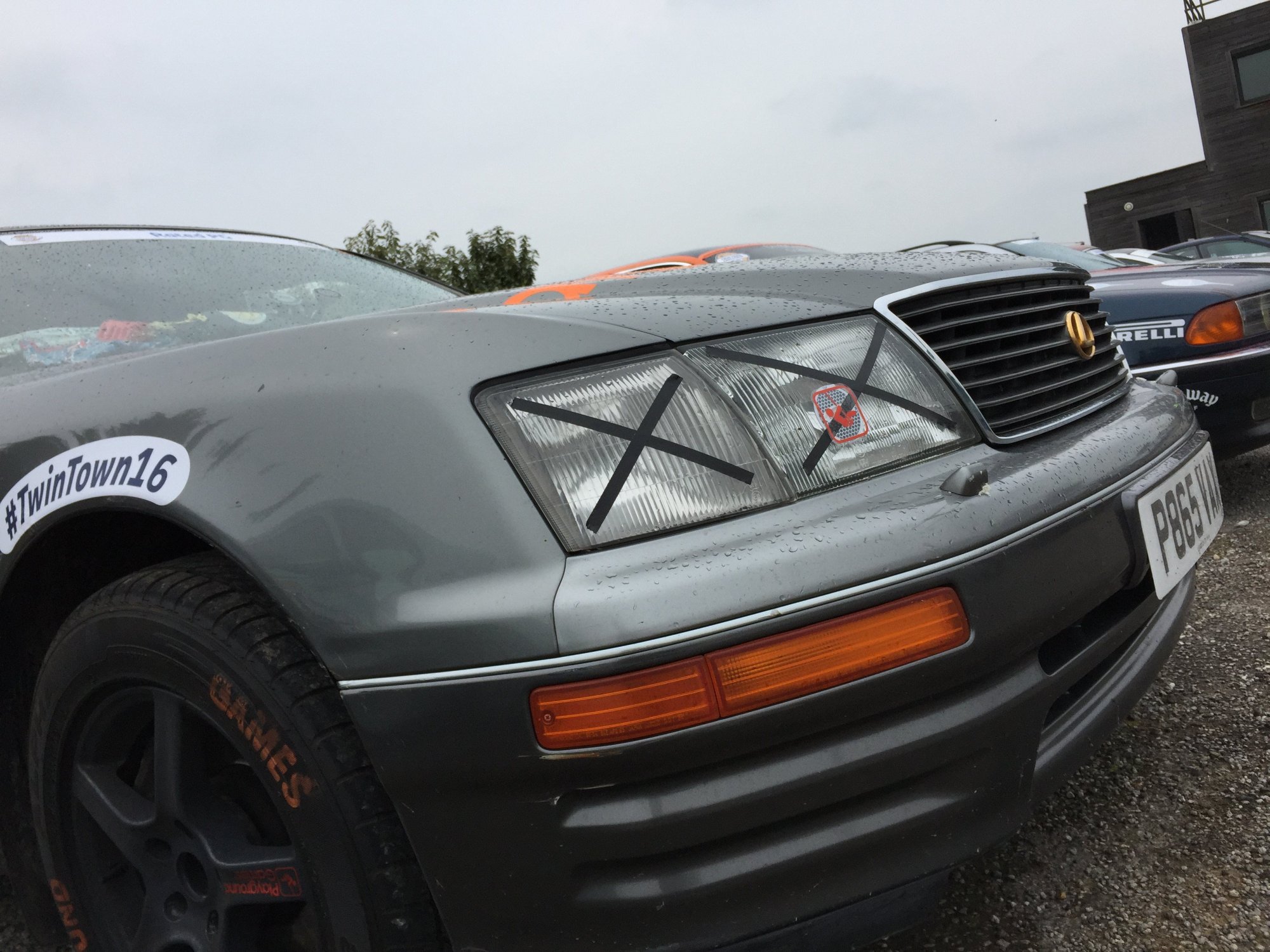 The first challenge at Abbeville was blind driving. Dave was passed a set of blacked-out goggles and we had to navigate a course of cones in the circuit car park. We instructed him in a series of half-turns of the wheels, and he got around without hitting a single cone!

The second challenge was car boxing. A box per-passenger was handed to the teams, but they were too big to fit in any of the cars! We had to hold them via a string handle outside the car as Chris navigated us around a karting circuit – without breaking those boxes! Again, the time was good and we didn’t damage anything.

This challenge was a timed change of a spare wheel. Fortunately between the three of us we’d got some mechanical knowledge. And some sneaky tools up our sleeves…

Chris grabbed the battery impact wrench out the boot, Dave got the trolley jack and I grabbed the spare wheel from the well. We blitzed the challenge, but were denied the win by seconds by the Volvo Amazon owners, who are car restoration specialists and were also well kitted out. No hard feelings there.

This was the big one! Fast-ish laps around the main Abbeville circuit. As we pulled out of the pits we pinned the throttle wide, manually selecting gears with the sluggish auto box. The Lexus roared down the straight, and by the next lap we’d brought quite a crowd to the edge of the circuit.

The following laps involved lots of power sliding out of corners, a fair few Scandinavian flicks and weight transfers and lots of blasting past other cars! Our Lexus was untouchable, but we had lots of fun. Our car was a hero, and we spent the rest of the day being praised for her – mostly asking what on earth is under the bonnet!

After a big party in Le Touquet the previous night, the rally returned home – some slightly worse for wear than others. The Lexus once again proved how truly awesome she was, and we sailed back without issue. We crossed the finish line revving her, but sadly knowing that we’d have to leave her at the end of our journey. 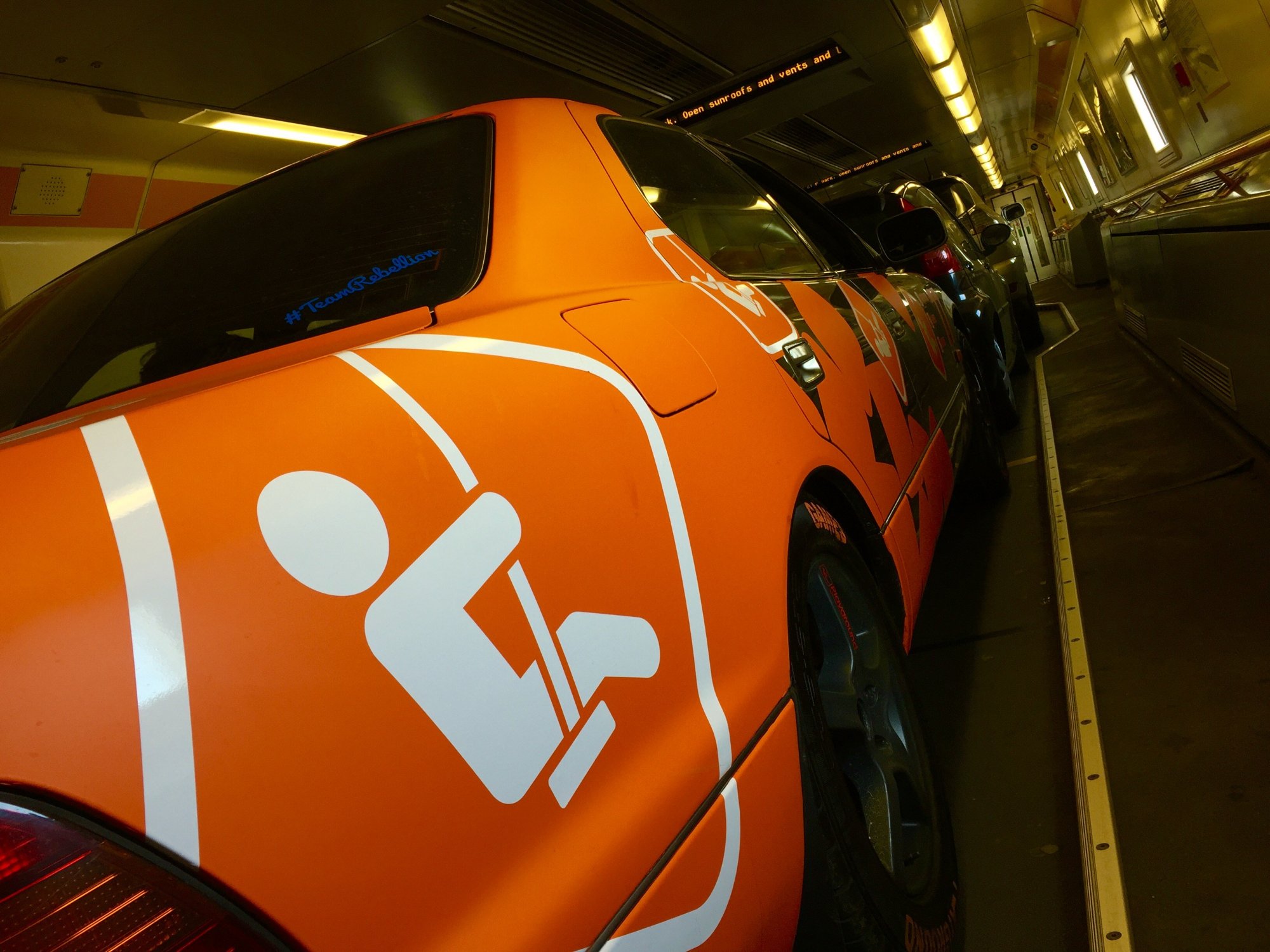 We were one of almost half the teams in the rally to pledge to donate their car at the end of the event. The cars are heading to auction on a special evening this Thursday, 2nd June, where quite a few of the other team members have already expressed interest in placing a bid… Hopefully she’ll make a lot of money for a very worthy cause.

Special Effect is an incredible charity. We learned a lot over the course of the weekend through presentations and speeches about the work that they do, and the affect that this work can have on some people in incredibly tough situations.

A remarkable statement for me came from Dr Mick Donegan, the founder and CEO of Special Effect, who said that the work that Special Effect do doesn’t just help disabled people, but helps these people to help themselves.

The rally’s aim was to make £250,000 for Special Effect. By the finish line, £230k was in the bank, and that’s without any of the car’s auction prices! It’s an ongoing effort and if we can encourage anyone to visit the page and donate it’d be a great thing! 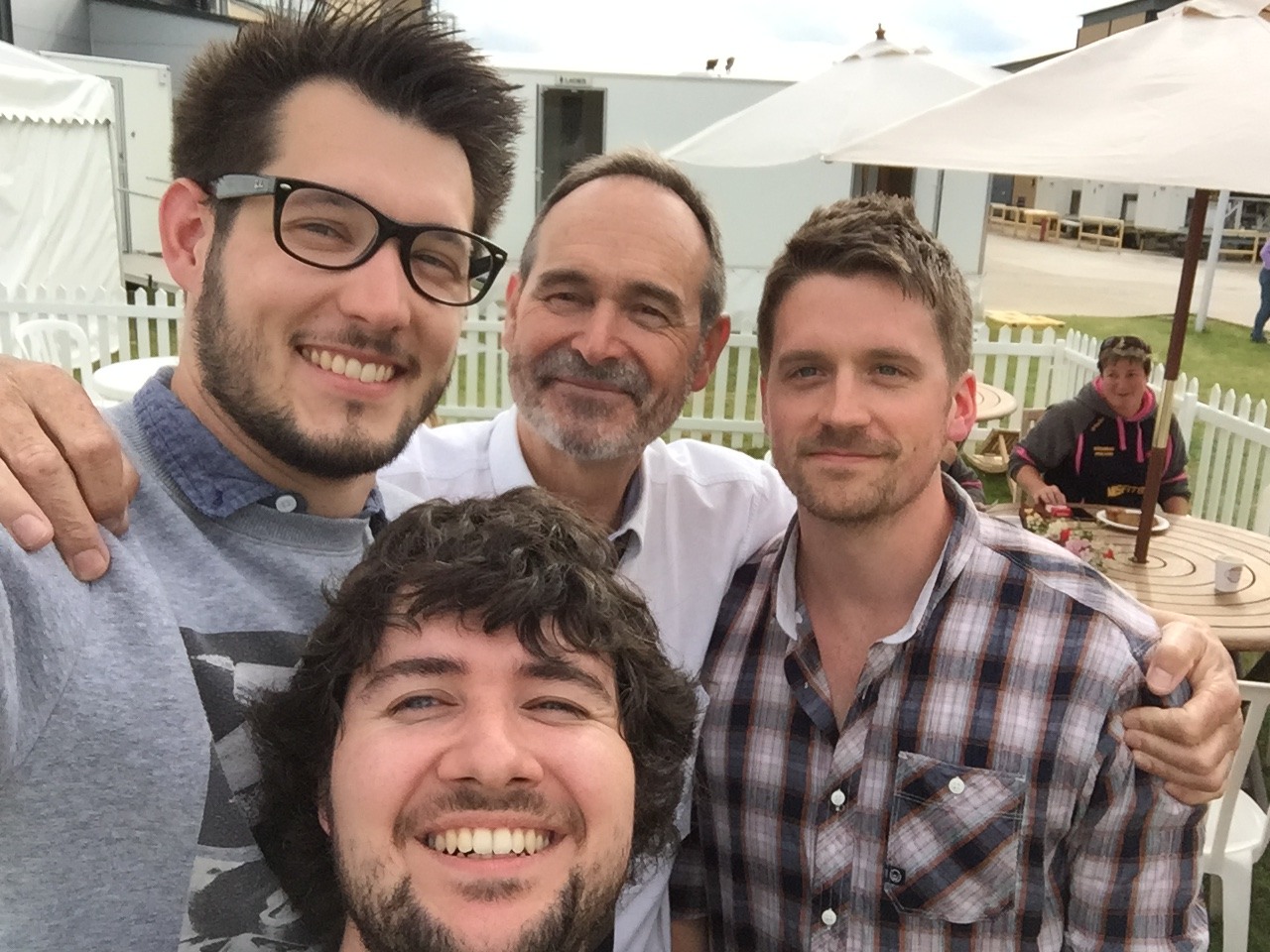 This website uses cookies to improve your experience. We'll assume you're ok with this, but you can opt-out if you wish. Read More